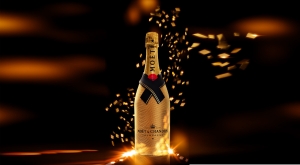 You probably have seen this before. While not exactly the latest news, it is in itself a discovery within it’s own category. A league of it’s own, luxury department store Selfridges developed a rather unusual way of selling a much coveted product like LVMH’s Moet & Chandon Champagne in a relatively ‘cheap’ manner. They built the world’s first luxury champagne vending machine. The machine could store up to 350 bottles and designed with computerized mechanics like a golden robotic arm that serves to move the bottles around. To bring on the festive mood during Christmas, packaging of each bottle comes coated in shimmering Swarovski crystals. I know we sometimes ended up wondering “Why didnt I think of that?” The idea of selling something expensive in an affordable manner, contextually swapping perspective to arouse curiosity is one of the most prevalent formula often adopted by marketers. Nicely done. Very refreshing.