Interesting TV Ad from Nissan for their Almera model. Check out the son seeks approval from his dad only to get a rather interesting surprise.

You have seen hard hitting movies, the ones resembling another cliche from Die Hard. Some of the most common scenes involves having a briefcase, cars on fire, high speed chasing and rigged cops. We now have a commercial thats not only just that, it is also highly interactive. Nissan has launched a new campaign for the Nissan Rogue, and the video was just thrilling with lots of action and a large involvement from the viewer after the clip ends. You are required to open a briefcase at the end of the video after being redirected to their facebook page. For all you know, you might just stand an opportunity to win yourself a Nissan Rogue. Great advertising effort! 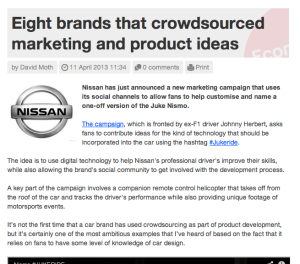 Crowdsourcing is definitely one of the potential options when it comes to good and effective marketing. You listen to what your consumers really want and at the same time let them plan for you. Because ultimately, their voice makes an impact to their purchasing decisions. Getting your fans engaged with your campaigns is vital because they play an essential role in determining whether your campaign will go viral at a much faster pace. A friend’s endorsement is way more effective as compared to a brand declaration. More and more brands these days are achieving great success as they harness the essence of effective crowdsourcing.